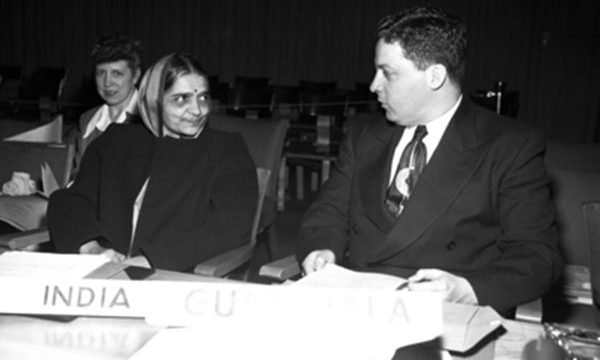 Unchir, Pauri-Garhwal, Uttarakhand, 10 December 2020: On the occasion of the World Human Rights Day (WHRD) today, the India Greens Party (IGP) and its Women’s Network (IGPWN) remembered the women who contributed significantly in shaping the Universal Declaration of Human Rights (UDHR).

In a press statement issued here on the occasion, the IGP President Suresh Nautiyal and the IGPWN Convener Mahima Bjardwaj said that there were several women from around the world who contributed significantly in shaping and framing the UDHR, which is considered as a milestone document that proclaims the inalienable rights which everyone is entitled to as a human being — regardless of race, colour, religion, sex, language, political or other opinion, national or social origin, property, birth or other status.

“Of these women, three of them – Hansa Mehta, Lakshmi Menon and Begum Shaista Ikramullah – belonged to the Indian sub-continent.

The IGP leaders said Hansa Mehta of India, the only other female delegate to the UN Commission on Human Rights in 1947-48, was a staunch fighter for women’s rights in India and abroad. She is widely credited with changing the phrase “All men are born free and equal” to “All human beings are born free and equal” in Article 1 of the Universal Declaration of Human Rights.

They said Lakshmi Menon of India and delegate of her country to the General Assembly’s Third Committee in 1948, argued forcefully for the repetition of non-discrimination based on sex throughout the Universal Declaration of Human Rights as well as for a mention of “the equal rights of men and women” in the preamble. She was also an outspoken advocate of the “universality” of human rights, strongly opposing the concept of “colonial relativism” that sought to deny human rights to people in countries under colonial rule. If women, and people under colonial rule, were not explicitly mentioned in the Universal Declaration, they would not be considered included in “everyone,” she argued.

Begum Shaista Ikramullah of Pakistan as a delegate to the General Assembly’s Third Committee on social, humanitarian and cultural matters, which in 1948 spent 81 meetings discussing the draft of the UDHR, advocated for emphasis on freedom, equality and choice in the Declaration. She championed the inclusion of Article 16, on equal rights in marriage, which she saw as a way to combat child marriage and forced marriage.

Eleanor Roosevelt of the US, first lady of her country from 1933 to 1945, served as the first Chairperson of the Commission on Human Rights and played an instrumental role in drafting the UDHR.

Minerva Bernardino of Dominican Republic, a diplomat and feminist leader from her country, was instrumental in arguing for inclusion of “the equality of men and women” in the preamble of the Universal Declaration of Human Rights.

Bodil Begtrup of Denmark, as Chairperson of the Sub-Commission on the Status of Women in 1946, and then of the Commission on the Status of Women in 1947, advocated for the Universal Declaration to refer to “all” or “everyone” as the holders of the rights, rather than “all men.” She also proposed including the rights of minorities in Article 26 on the right to education, but her ideas were too controversial at the time.

Marie-Hélène Lefaucheux of France, as Chairperson of the Commission on the Status of Women in 1948, successfully advocated for a mention of non-discrimination based on sex to be included in Article 2.

Evdokia Uralova of the Byelorussian Soviet Socialist Republic was the Rapporteur of the Commission on the Status of Women to the Commission on Human Rights in 1947. She strongly argued for equal pay for women.