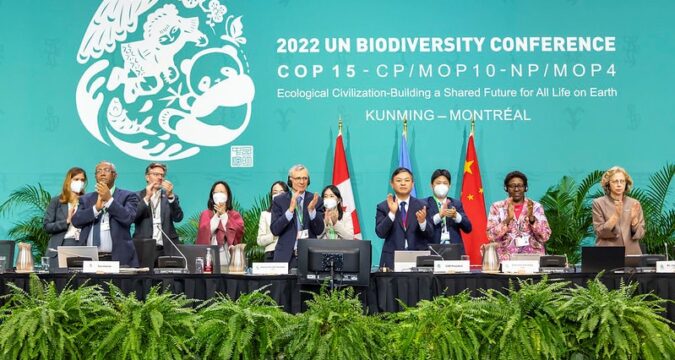 Unchir-Dunktok, Pauri Garhwal, Uttarakhand, 20 December 2022: The India Greens Party (iGP) today supported the view that the Global Biodiversity Framework (GBF), agreed at COP15, has failed biodiversity, and could still fail Indigenous peoples if promises to respect their rights are ignored by the conservation industry.

The iGP, in a statement issued here at its national head office (NHO), agreed that the GBF failed to take the bold step required to really protect nature – to recognise that Indigenous peoples are the best conservationists and that the best way to protect biodiversity is to protect their land rights.

The United Nations Biodiversity Conference (COP15) ended in Montreal, Canada on 19 December 2022 with an agreement to guide global action on nature through to 2030. Representatives from 188 governments gathered in Montreal for the important summit.

Chaired by China and hosted by Canada, COP15 resulted in the adoption of the Kunming-Montreal Global Biodiversity Framework (GBF) on the last day of negotiations.

The GBF aims to address biodiversity loss, restore ecosystems and protect indigenous rights but the intentions are not very strong, the iGP pointed out.

The iGP said the plan that includes concrete measures to halt and reverse nature loss, including putting 30 percent of the planet and 30 percent of degraded ecosystems under protection by 2030 needs to be implemented in a proper manner.

The party said the proposals to increase finance to developing countries – a major sticking point during talks – are good but would like to see the light of the day.

What took place at COP 15 includes: (i) Adoption of an equitable and comprehensive framework matched by the resources needed for implementation; (ii) Clear targets to address overexploitation, pollution, fragmentation and unsustainable agricultural practices; (iii) A plan that safeguards the rights of indigenous peoples and recognizes their contributions as stewards of nature; and (iv) Finance for biodiversity and alignment of financial flows with nature to drive finances toward sustainable investments and away from environmentally harmful ones.

Despite a last-minute and powerful intervention by the International Indigenous Forum on Biodiversity, calling for Indigenous territories to count towards the 30 percent target, this demand was rejected, principally by European countries, despite widespread evidence showing that Indigenous peoples protect their lands better than anyone else and that their territories should be a key mechanism in biodiversity protection. This once again showed that the colonial mentality in conservation – the claim that “Western conservationists” “know best” – is still alive and well.

However, what was seen in Montreal is clear that we can’t trust the conservation industry, business and powerful countries to do the right thing.

We need to keep fighting for the respect and recognition of Indigenous land rights, the iGP said.

The Global Biodiversity Framework: The GBF consists of four overarching global goals to protect nature, including: halting human-induced extinction of threatened species and reducing the rate of extinction of all species tenfold by 2050; sustainable use and management of biodiversity to ensure that nature’s contributions to people are valued, maintained and enhanced; fair sharing of the benefits from the utilization of genetic resources, and digital sequence information on genetic resources; and that adequate means of implementing the GBF be accessible to all Parties, particularly Least Developed Countries and Small Island Developing States. The GBF also features 23 targets to achieve by 2030.

Finance at the core: Finance played a key role at COP15, with discussions centring on how much money developed countries will send to developing countries to address biodiversity loss. It was requested that the Global Environment Facility set up a Special Trust Fund – the GBF Fund – to support the implementation of the GBF, in order to ensure an adequate, predictable and timely flow of funds.

Countries also approved a series of related agreements to implement the GBF, including on planning, monitoring, reporting and review, which are all vital to ensure progress is made – in the words of the GBF, to ensure that there is not “a further acceleration in the global rate of species extinction, which is already at least tens to hundreds of times higher than it has averaged over the past 10 million years.