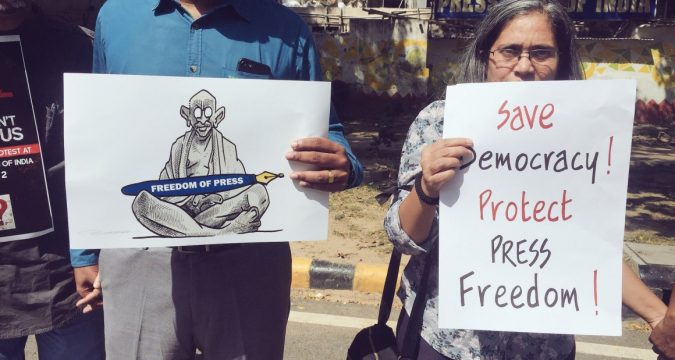 Unchir-Dunktok, Pauri Garhwal, Uttarakhand, 6 April 2021: The India Greens Party (iGP) today condemned the attacks on journalists and called for an end to their victimisation.

In a press statement issued at the iGP national head office at Unchir-Dunktok Uttarakhand, the party President Suresh Nautiyal said the fourth pillar of democracy is being threatened as more and more mediapersons are admonished or attacked in several parts of the country.

“The India Greens Party condemns the growing antagonism towards mediapersons who are trying to strengthen democracy in the country by doing their job,” the Green leader said.

Mr Nautiyal pointed out that the aggressive expressions of communal politics were responsible for the attacks on mediapersons.

“One can see these expressions in so many parts of the country. For example, in Kashmir, where a photojournalist Qisar Mir covering a gunfight along with other journalists near Pulwama on April 2, was kicked from behind by a police constable, and another security personnel pointed a pellet gun at the journalists,” said the Green leader.

He said it is a matter of grave concern that even politicians are attacking journalists. On March 28, union minister Babul Supriyo grabbed the mobile phone of Bipin Chaaubey, a cameraperson of TV9 Bharatvarsh, when he recorded the minister slapping a party worker during electioneering in Kolkata.

Mr Nautiyal said a video has also emerged of UP Chief Minister Adityanath using abusive language against an ANI cameraperson.

Besides, Tripura Chief Minister Biplab Deb has openly threatened the journalists and as a consequence, more than twenty mediapersons have been attacked in the state over past six months, Mr Nautiyal added.

Not only this, a chargesheet has been filed against a Kerala journalist, Siddique Kappan, and several others, who were arrested in 2020 while going to Hathras to cover the rape and murder of a Dalit girl there. Kappan and the others have been charged under UAPA, allegedly for planning to incite riots in Hathras.

“In view of all this, iGP calls for an end to the victimisation of mediapersons,” Mr Nautiyal demanded.