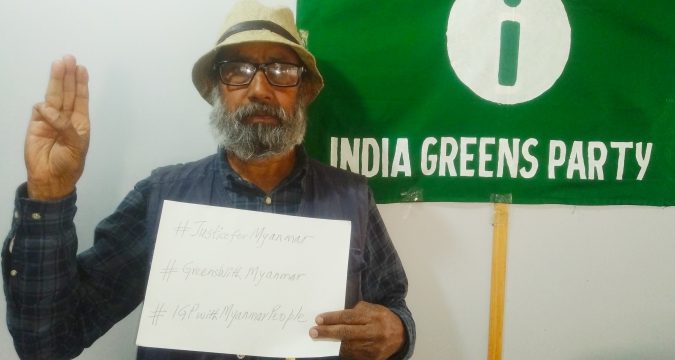 Unchir-Dunktok, Pauri Garhwal, Uttarakhand, 27 March 2021: The India Greens Party (iGP) today expressed its solidarity with the domestic Civil Disobedience Movement of the Myanmar’s citizens who have taken to the streets to protest against country’s military dictatorship and coup d’état in February.

The Indian Green leader said it is condemnable that the military in Myanmar has enacted a number of countermeasures in response to the growing protest movement.

“In today’s world, media, internet and social media blackouts is nothing but an attempt to kill democracy. The protesters are being framed in false criminal cases and put behind the bars. Also, the political parties are being forced to participate in the self-appointed State Administration Council, which is an attempt to replace the elected government body,” Mr Nautiyal pointed out.

He said it is very sad that the military Junta is using the police force to violently suppress the protesters; and, deploying pro-military protesters and instigators.

Domestic civil resistance efforts in Myanmar, known locally as the Spring Revolution began in early this year in opposition to the coup d’état on 1 February, staged by Min Aung Hlaing, the commander-in-chief of the country’s armed forces, the Tatmadaw.

As of 16 March 2021, at least 2,175 people were detained, and at least 320 protestors killed by military or police forces despite the fact that protesters are peaceful and nonviolent.

“There is no reason or rhyme to apply violent means to suppress the peaceful Civil Disobedience Movement. What is wrong if the citizens of Myanmar are organising labour strikes, boycotting military rule, doing pot-banging activities, organising public protest including a red ribbon campaign, and asking for formal recognition of the election results by elected representatives,” asked the Green leader.

“India Greens Party supports the Civil Disobedience Movement against military dictatorship in Myanmar which is seeing yet another manifestation today. We very much support the citizens of the country who are also asking for a concerted effort and support across borders,” Mr Nautiyal added.

“The India Greens Party would also like to appreciate the Green Party Korea (GPK) which has called for a joint action in solidarity with the people of Myanmar and the Civil Disobedience Movement there. It is commendable that the Korean civil society and organisations of different hue are holding a joint march and a memorial campaign today,” the iGP President said.

He agreed with the GPK that it was time to connect and join forces beyond the actions of a country, and such joint actions were vital to confront violations of human rights.

Mr Nautiyal underscored the need to expose the big corporate companies which are unethically funding the military dictatorship in Myanmar.

“Several multinational companies from different countries are funding the junta through joint investments in Myanmar. The India Greens Party condemns the role of the multinational corporations like Korea’s POSCO and Lotte in Myanmar and demands an immediate withdrawal of this kind of investment. Also, the party demands that the dictatorship there stop human rights abuses in the country. Besides, the arms exporting countries must not deal with the dictatorship in Myanmar and stop exporting arms to the country,” demanded the iGP leader.

Mr Nautiyal said the iGP also expresses solidarity with the joint action today at 1300hrs, and will be part of the social media hashtag campaign. The party will also join the campaign by posting in support of the hashtags — #JusticeForMyanmar and #GreensWithMyanmar.