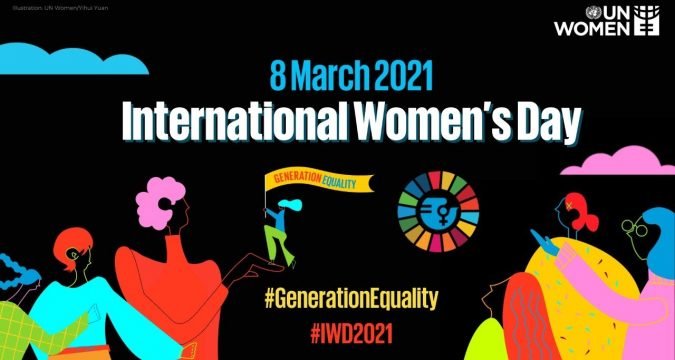 Unchir-Dunktok, Pauri Garhwal, Uttarakhand, 8 March 2021: Congratulating the world community on the occasion of the International Women’s Day (IWD) today, the India Greens Party (IGP) reminded that no country would progress and prosper without equal participation of women.

In a press statement issued on the occasion, the IGP President Suresh Nautiyal said the world governments needed to change the stereotypes by making the political will to actively and intentionally support women’s representation.

The International Women’s Day (IWD) is observed on 8 March every year to celebrate the womanhood by highlighting their achievements and problems faced by them.

The theme for this year is: “Women in leadership: Achieving an equal future in a COVID-19 world.” The theme highlights how women can be made equal partners in the decision-making processes especially with regard to policymaking.

The IGP thinks that for such a revolutionary step, we first need to break cultural, political, socio-economic and historical barriers that prevent the progress of women.

Mr Nautiyal said the IWD this year comes at a difficult time, due to Covid-19 pandemic, for the world and for gender equality. However, it is a moment to fight for transformative action and to salute women for their relentless drive for gender equality and human rights.

The Covid-19 pandemic spared nobody, and was particularly challenging for women around the world. Doctors, nurses, teachers, shop assistants – jobs often held by women – found themselves at the frontline of the pandemic; all this, while taking on greater responsibilities at home.

The COVID-19 pandemic has exacerbated the existing inequalities in our society. It has put women at a great risk, including, at times, in their own homes.

The IGP President called on the world community to take a moment to thank women for their bravery, their compassion and their contribution in fighting this crisis, also by keeping the societies, care systems and most essential services running.

While women made up the majority of frontline workers in the healthcare, they were barely represented in the pandemic decision-making processes.

“Gender equality must be at the heart of the post-pandemic recovery. The party is committed to have women better represented in leadership positions in the party organisation,” the IGP President added.

He said it is not a good situation that in many parts of the world, women continue to be underpaid and work in vulnerable conditions. “It is high time to end marginalisation and exclusion of women and girls,” Mr Nautiyal stated, adding that the party remained committed to ensure women’s equal participation in all spheres of life and in the organisation.

“The focus of the IGP is on women’s leadership and on ramping up representation in the areas where decisions are made about the issues that affect women’s lives in particular and in other areas in general. Also, the party is committed to empower the women members through gender equity toolkit and training which eventually will benefit the whole party organisation and society,” Mr Nautiyal emphasised.

Mr Nautiyal said it is regrettable that even after several decades of Independence, women in the country and elsewhere continue to remain on the socio-cultural, economic and political margins. It is also sad that the world has made unprecedented advances, but no country has achieved gender equity.

“It is disappointing that numerous restrictions keep more than 2.7 billion women in the world from accessing the same choice of jobs as men,” the IGP President pointed out.

He pointed out that the IGP is a political organisation that has been committed to the gender equity since its inception and continues to work towards these goals.

Mr Nautiyal said that the world, during the Covid-19 pandemic, saw increased violence against women and girls. Millions more women have plunged into extreme poverty as they lost their jobs. It is because in most countries there is simply not the critical mass of women in decision-making and leadership positions.

“On this Day, the IGP recognises that women bear the burden of keeping the home fires burning despite loss of jobs and incomes and are bringing up children in adversity. The party expresses its solidarity with all the struggles of all Indian women,” Mr Nautiyal stated.

In 2020, as a global average, women were only 4.4 per cent of CEOs, occupied just 16.9 per cent of board seats, made up only 25 per cent of national parliamentarians, and just 13 per cent of peace negotiators. Only 22 countries currently have a woman as Head of State or Government and 119 have never experienced this.

This can and must change. What is needed is the political will to actively and intentionally support women’s representation. No country progresses and prospers without the engagement of women. “We need women’s representation that reflects all women and girls in all their diversity and abilities, and across all cultural, social, economic and political situations. This is the only way we will get real societal change that incorporates women in decision-making as equals and benefits us all,” the Green leader concluded by adding that IWD is a time to reflect on the extraordinary progress made by ordinary women.