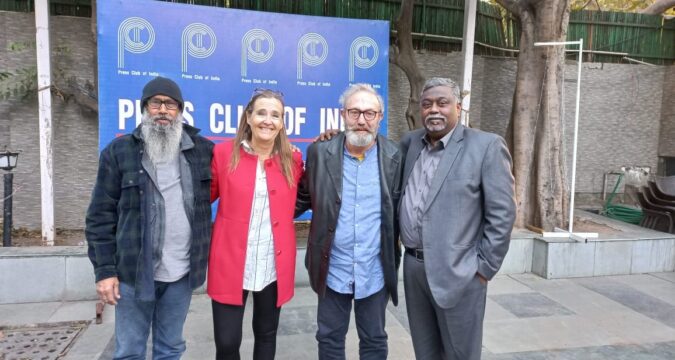 New Delhi, 28 December 2022: The India Greens Party (iGP) and the Swedish Green Party (SGP) today appealed to all the green parties to have proactive collaborations in order to mainstream the green political movement throughout the world.

Welcoming Ms Boldin Valero and her husband to India, Mr Nautiyal said there is a great need for collaborations among the green parties of both hemispheres. Agreeing to this, Ms Valero said such collaborations are vital to strengthen the global green political movement.

According to a press release issued here by the Chief Spokesperson of the party, Ms Valero said the green parties needed to be strengthened so that they make a difference. She said the green party in her country has a good relationship with the Social Democrats, and to some extent with the Left Party; however, it was need of the hour to make the Swedish Green Party stronger in the country, and the European Parliament.

Mr Vishwajeet expressed his views on the geo-political situation in several parts of the world and emphasised on pushing more and more for the peace efforts.

Ms Valero served as a Member of the European Parliament (MEP) from 2014 until 2019. She served as the green coordinator in the Security and Defence Committee (SEDE). She also served a member of the Committee on Civil Liberties, Justice and Home Affairs (LIBE) and the Delegation to the ACP-EU Joint Parliamentary Assembly (DACP) and as substitute in the Committee on Foreign Affairs (AFET), the Delegation for relations with the countries of Central America (DCAM) and the Delegation to the Euro-Latin American Parliamentary Assembly (DLAT). In addition to her committee assignments, Valero served as vice-chairwoman of the European Parliament Intergroup on the Western Sahara.

Currently, Ms Valero works with the rights of refugees and migrants and for legal roads in the EU. She advocates an open and humane migration policy, and committed to the minority rights.