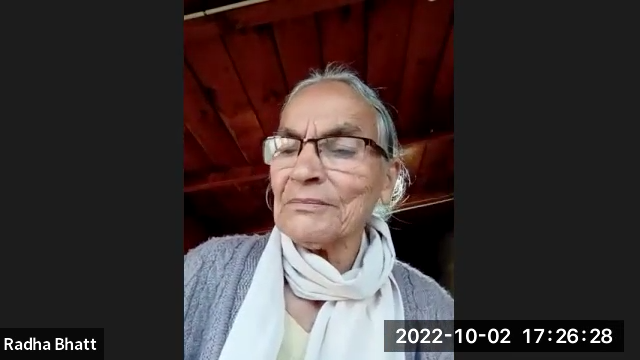 Unchir–Dunktok, Pauri Garhwal, Uttarakhand, 2 October 2022: The India Greens Party today celebrated the 153rd birth anniversary of Mohandas Karamchand Gandhi, leader of the Indian Independence Movement and pioneer of the philosophy of nonviolence and austerity; and, organised a webinar on the topic of Gandhi and Sustainability on the occasion.

The UN International Day of Nonviolence is also observed on Gandhi’s birth anniversary. In a press release issued here at the party’s national head office (NHO) on the occasion, the iGP said it also celebrated the birth anniversary of Lal Bahadur Shastri, the former Prime Minister of India.

Besides, the iGP remembered the Uttarakhand State Movement agitationists killed on 2 October 1994 by the Uttar Pradesh Government machinery, its police force, and the goons of the then ruling coalition parties. The party noted that this is why the people of Uttarakhand observer 2 October as a Black Day.

The webinar on Gandhi and Sustainability was organised under the Green Dialogue Series. Introducing the topic of the webinar, the iGP Founder-Patron-Mentor, Suresh Nautiyal, said the concept of sustainability became well known through the famous Brundtland Report, entitled, Our Common Future, published in 1987. This Report recognised that the natural resources were not inexhaustible, not infinite. It said the development process should be aimed at meeting the needs of the present generation without compromising the ability of future generations to meet their own needs.

“This thinking definitely brought a paradigm shift in ecological science, humans essentially being in the centre of the ecosystem functioning. And, this very idea of sustainability figures prominently in Gandhiji’s teachings,” he pointed out. The iGP Founder quoted Gandhi where he said the world has enough for everyone’s need, but not enough for everyone’s greed, and added that this very statement indicated his idea about sustainability.

Mr Nautiyal said Gandhi rightly said what we do today, is our future. This means, we are bound to suffer if our lifestyles are not sustainable! He agreed with Gandhi that we should not look upon the natural resources – water, air, land – as inheritance from our forefathers; and rather consider them to be the loan given by our next generation.

The distinguished Speaker in the webinar, Ms Radha Bhatt, Patron of the Lakshmi Ashram at Kausani, Uttarakhand, and former Chairperson of the prestigious Gandhi Peace Foundation, New Delhi, said the Gandhian thought and sustainable living were the only way forward if we wanted to exist as humans, and replenish Nature.

Ms Bhatt was visibly upset while commenting on rampant corruption in government and public life. She lamented that the focus of the governments was to pursue economic growth through destruction-infused development. And it was so because the so-called development remained guided by consumerism, corruption, market, money and nepotism – unsustainability in a nutshell.

Doyenne of the Gandhian social workers said the so-called development was no development at all and the governments were clueless about  what kind of development they required for the welfare of the masses. She said, Gandhi was not in favour of the run-of-the-mill political parties. He very clearly told the Congress party to discontinue as a political party. He told them that their task was finished and there was no need for the party anymore. Gandhi said so because he wanted every village of the country to turn into a Village Republic where everything would be under the control of the villagers without any interference from anywhere.

Ms Bhatt said, sustainable development means to fulfil the present needs without compromising the needs of future generations, and Gandhi’s way of living is the best example of sustainable living and development for the world. Concluding her remarks, Ms Bhatt said, there is an urgent need for a paradigm shift in the thinking regarding the concept of the so-called development. Mere economic development is never inclusive. Health, education and social harmony and justice, and love were essential parts of holistic and sustainable living.

After her presentation, she interacted with the iGP leaders like Co-President Rajendra Minj, Vice-Presidents Michael Rajchandra, Rehana Siddiqui and Rusi Burjor Nariman, and the iGPWN Deputy Convener Sarika Dabral, etc. They got very satisfying answers to their queries from Ms Bhatt. iGP Chief Spokesperson Prabhath Prabhakaran was also present in the webinar.

Earlier, welcoming the speaker, Ms Radha Bhatt, and the attendees, Ms Ishpriya Kaur, Convener of the Social Media Committee and Member of the Political Affairs Committee of the party, illustrated the brief history of the party. She said the India Greens Party came into existence on 2 July 2017, however, it was formally founded on 18 November 2018 with the adoption of its constitution and formation of the national executive under the leadership of senior journalist and environmentalist, Mr Suresh Nautiyal.

“The party was registered as a political party by the Election Commission of India on 18 July 2019. Today, it has its footprints in nearly 30 states and union territories of the country, and committees in more than a dozen states. The iGP has more than one lakh and 66 thousand hits on its website,” she pointed out, requesting the attendees to support the party by filling the membership form of the party, and by donating to the party.