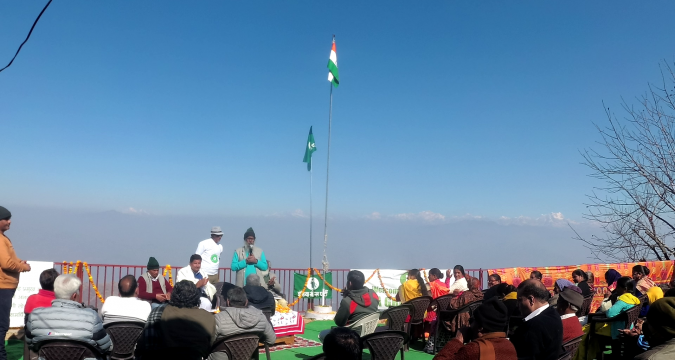 IGP inaugurates its national HQ in Uttarakhand on Republic Day

Mr Gyanendra Gurjar, a farmers’ leader from Uttar Pradesh, along with the IGP President Suresh Nautiyal and Vice-President Rajendra Minz hoisted the National Tricolour on the occasion.

The IGP President, Suresh Nautiyal, in a press release issued here said the party’s national HQ was also inaugurated by Mr Gurjar after the National Tricolour and the IGP Flag hoisting ceremony at the GreenDham AnandiChait IndraBalbhadra Parisar (complex).

He said the party leaders including Vice-President Rajendra Minz and Treasurer Vinod Nautiyal and other dignitaries from different parts of the country attended the function. Social activists like Rajendra Raturi, NK Seth, Mukesh Nautiyal, and film maker Vijay Sehrawat were prominent among them.

The local village people, irrespective of their political affiliations, also took part in the ceremony.

The IGP leader said the GreenDham AnandiChait is going to be the main hub for Green Politics, Green Principles and Values, and Green Philosophy in the country. “The GreenDham will attract Green political workers and activists from across the world,” he added.

He said the party remains committed to the six Core Principles of the Global Greens which included ecological wisdom, sustainability, social justice, non-violence, participatory democracy and respect for diversity.

The IGP President said practicing these values in day-to-day life will bring ecological democracy quite soon and ensure a secured and sustained future for the generations to come.

The IGP Office Secretary and PS to President, Subhash Dabral, conducted the proceedings of the function.