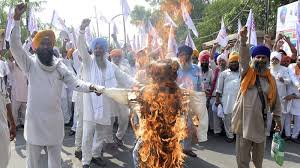 Onchar, Pauri-Garhwal, Uttarakhand, 23 September 2020: The India Greens Party (IGP) has criticised the Modi Government for passing the Farm Bills in Parliament and described the move as detrimental to the interests of the Indian farmers.

In a press statement issued here today, the IGP President Suresh Nautiyal said agriculture is not only a primary source of livelihood for majority of the population in the country but also an issue of survival and existence for the farmers.

“Therefore, it should not be an issue of trade. Most of the Indian farmers do not even know where and how they will get their next meal. In such a situation, the passage of the Farm Bills is the most irresponsible act on part of an elected government,” Mr Nautiyal said.

“It is very sad that the central government is behaving like a locust swarm, not like a protector. With the passing of the Farms Bill in Parliament, the Modi Government is all set to break the backbone of the farmers of the country,” he pointed out.

Mr Nautiyal said the Modi Government’s claim that the Bills are set to transform the agriculture sector in the country will prove wrong sooner than later.

Three Bills on agriculture reforms – The Farmers’ Produce Trade and Commerce (Promotion and Facilitation) Bill, 2020; The Farmers (Empowerment and Protection) Agreement of Price Assurance and Farm Services Bill, 2020; and The Essential Commodities (Amendment) Bill, 2020 – were introduced in Parliament on September 14 to replace the ordinances issued during the lockdown.

Two of these three Bills were passed by the Rajya Sabha by voice vote on Sunday (20 September 2020) amid a din as the Opposition parties, enraged by the refusal of Deputy Chairman Harivansh to allow voting on resolutions they moved, broke microphones, stood up on tables and flung papers in the air. The legislation — the Farmers’ Produce Trade and Commerce (Promotion and Facilitation) Bill, 2020, and the Farmers (Empowerment and Protection) Agreement on Price Assurance and Farm Services Bill, 2020, were cleared by the Lok Sabha the previous week.

The IGP President said it is very sad that voices of the farmers and their associations across the country were not heard despite numerous protests against the related ordinances. In a state like Punjab the state assembly even had passed a resolution rejecting the Centre’s ordinances.

Mr Nautiyal said the government’s claim that the Bills will transform the agriculture sector is going to prove wrong sooner than later. The fact is that the farmers will not get the minimum support price (MSP) for their produce because there will be the upper hand of the agri-businesses and big retailers in negotiations.

“The agri-business companies will not only dictate the prices but also the benefits for small farmers will reduce in the new regime,” regretted the IGP President.