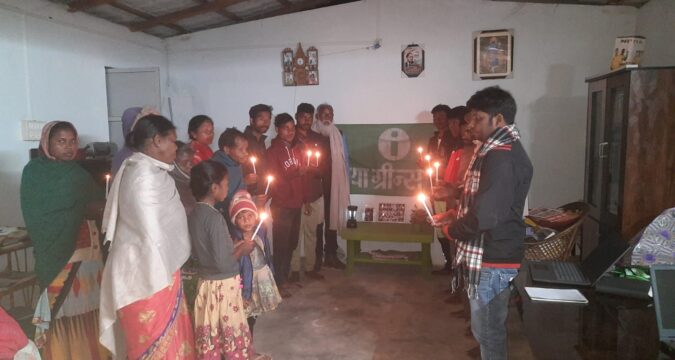 Bahora, Jashpur, Chhattisgarh, 3 December 2022: The Chhattisgarh unit of the India Greens Party (iGP) today paid homage to the victim of the world’s worst industrial disaster Bhopal Gas Tragedy that happened in the winter night of 2/3 December in 1984.

According to a press release issued here by the Chhattisgarh unit of the India Greens Party, the homage programme was organised at the office of the iGP Co-President Rajendra Minj. Ms Lily Shanta Minj, Vice-President of the party, local members of the party and the village people took part in the programme. It was chaired by Mr Rajendra Minj, a victim of the Bhopal gas tragedy himself.

The Bhopal disaster, also referred to as the Bhopal gas tragedy, was a chemical accident on the night of 2–3 December 1984 at the Union Carbide India Limited (UCIL) pesticide plant in Bhopal Madhya Pradesh. Over 570,000 people were exposed to methyl isocynate (MIC) gas. The highly toxic substance made its way into and around the small towns located near the plant. Estimates vary on the death toll, with the official number of immediate deaths being 2,259. In 2008, the Government of Madhya Pradesh paid compensation to the family members of 3,787 victims killed in the gas release, and to 574,366 injured victims. A government affidavit in 2006 stated that the leak caused 558,125 injuries, including 38,478 temporary partial injuries and approximately 3,900 severely and permanently disabling injuries. Others estimate that 8,000 died within two weeks, and another 8,000 or more have since died from gas-related diseases.

The owner of the factory, UCIL, was majority owned by the Union Carbide Corporation (UCC), with Indian Government-controlled banks and the Indian public holding a 49.1 percent stake. In 1989, UCC paid $470 million to settle litigation stemming from the disaster.

Civil and criminal cases were filed in the United States against UCC and Warren Anderson, UCC CEO at the time of the disaster, were dismissed and redirected to Indian courts on multiple occasions between 1986 and 2012, as the US courts focused on UCIL being a standalone entity of India.

In a nutshell, the UCC and the US courts did not deliver justice to the victims of the Bhopal gas tragedy.

On the occasion, the iGP Founder, Suresh Nautiyal, who joined the programme online from the national head office (NHO) of the party, said it was important to realise that the world can live without most chemicals and pesticides. “These not only kill thousands of organisms in the soil but also other living beings including the humans. The chemicals pollute our soil, atmosphere, environment and water, and disturb ecological systems. The Bhopal gas tragedy is one such example,” he pointed out.

Mr Nautiyal emphasised that the Bhopal gas tragedy also underscored how irresponsible the multinational corporations and the courts of their respective countries were, and are.

Mr Rajendra Minj said the state unit of the party continues to protest the disastrous projects like the Hasdeo and Buxwaha in the states of Chhattisgarh and Madhya Pradesh.

Ms Lily Shanta Minj said women are the main victims of the big projects. “Women need to unite against all projects that are not for the welfare of the villagers and the common people,” she added.