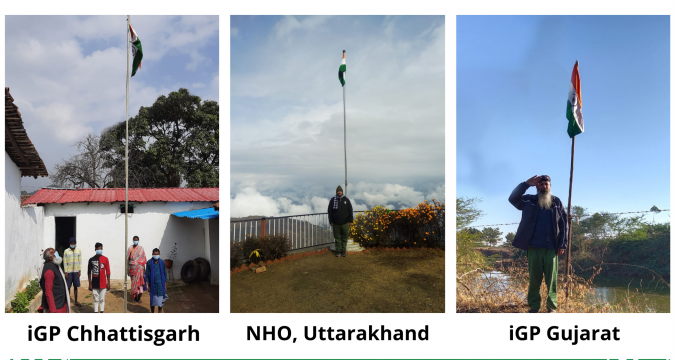 Unchir-Dunktok, Pauri Garhwal, Uttarakhand, 26 January 2022: On the occasion of 73rd Republic Day of India today, the India Greens Party called upon the citizens of the country to do their best to preserve and protect the unity, integrity, diversity, and sister-brotherhood of the country.

In a press release issued on the occasion by party’s Chief Spokesperson Suresh Nautiyal, he said the iGP leaders hoisted and unfurled the National Tricolour at several places in the country mainly at party’s national head office (NHO) at Unchir-Dunktok in Pauri Garhwal district of the Uttarakhand state, at Bahora village of Jashpur district in the Chhattisgarh state, and at Navalgadh village in Surendranagar district of the Gujarat state.

At the party’s NHO in Uttarakhand, the National Flag was unfurled by Office Secretary Deepak Dabral.

At Bahora village in Chhattisgarh, the flag was hoisted by Co-President Rajendra Minz.

At Navalgarh village in Gujarat, Tricolour was hoisted by the National Vice-President Ranmal Singh Jhala.

On this occasion, party’s Co-Presidents Dr Apeksha Wasudeo Khobragade and Rajendra Minz said the country is passing through difficult times and every citizen of the country is expected to do the best to preserve and protect the unity, integrity, diversity, and sister-brotherhood of the country.

They said all difficulties can be overcome if the people are united to preserve and protect the unity and integrity of the country no matter how diverse their political ideologies and opinions are.

On this day in 1950, the country’s constitution, which was adopted on 26 November 1949, came into effect replacing the Government of India Act, 1935 with a democratic government system, completing the country’s transition towards becoming an independent republic.

This day, 26 January, was chosen as the date for Republic Day because it was on this day in 1930 when the Declaration of Indian Independence (Purna Swaraj) was proclaimed by the Indian National Congress.