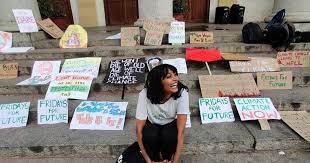 New Delhi, 16 February 2021: The India Greens Party (IGP) today called upon the government to release the activists and assist them in resuming their normal life; instead of targeting them for extending solidarity to struggles that resonate with their own aspirations for a healthy and secure future.

The IGP President Suresh Nautiyal in a statement issued here said that the government should instead take country’s youth into confidence, understand their concerns about their future, and work with them to safeguard environment and strengthen institutions of democratic decision-making.

“It is disheartening to note that Ms Disha Ravi, a 21-year old young woman and climate activist from Bengaluru, was picked up by the Delhi Police from there and taken to the national capital with no disclosure about her whereabouts, not even to her parents,” said the IGP leader.

Ms Disha Ravi was picked up for sharing an advocacy toolkit inviting solidarity with the farmers’ protests outside Delhi, which was shared by noted teen climate change activist Greta Thunberg.

Mr Nautiyal said it was sad that Ms Nisha Ravi was remanded to police custody. Such incidents are highly disturbing both for what appears to be their illegal nature and for the over-reaction of the State. This action is clear violation of norms for arrests and detentions laid down by the Supreme Court.

It is regrettable that the young environmental activists, that the country should be proud of, are the latest victims of the government’s continuing efforts to deligitimise the ongoing farmers protest and the nationwide solidarity it has generated.