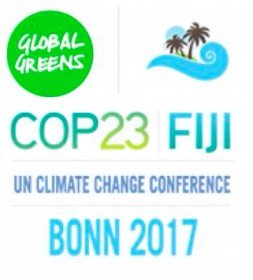 COP23 – formally, the 23rd session of the Conference of the Parties to the United Nations Framework Convention on Climate Change – held in Bonn, Germany in November 2018 focused on creating rules for implementing the Paris Agreement.  The key outcome of this COP’s Fijian Presidency is to get nearly 200 countries to agree to use the Pacific tradition of Talanoa – a process of inclusive, participatory and transparent dialogue – for working through the delicate, and at times contentious, details of implementing the Paris Agreement.

The purpose of Talanoa is to share stories, build empathy and to make wise decisions for the collective good. The Talanoa process involves sharing ideas, skills and experiences through storytelling. During this process, Countries build trust and advance knowledge through empathy, understanding and avoiding blame or speaking critically of others.  The process poses three questions for the world to ponder: 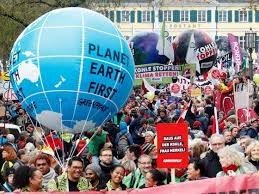 The Talanoa process is also referred to as the “2018 Facilitative Dialogue” and will be used in climate-related meetings throughout 2018 and COP24 to continuously increase the ambition and results of existing nationally determined contributions (NDCs) for countries to actually keep global temperatures below 1.5°C above pre-industrial levels.

COP23 began with the biggest climate change demonstration to have ever been held in Germany, with 25,000 people marching across Bonn calling for the end of coal and for social and environmental justice.  Here are some pictures of the parade taken by the Belgian Green party Ecolo, and here is a Global Greens video of the climate march featuring messages from Wibke Brems, Greens Spokesperson for climate protection in the German state of North Rhine Westphalia, and by Marion, international representative of Belgium’s Green youth organisation Ecolo J.  The next day activists shut down a massive open-pit lignite coal mine near Bonn to highlight the contradictions in Germany’s espoused support for climate action and their real actions.  Foreign Policy journal points out this hypocrisy well:

“Germany is Europe’s largest producer and burner of coal, which accounted for 40.3 percent of net power production in 2017: 15.5 percent from hard coal and 24.8 percent from lignite, also known as brown coal, among the dirtiest of fossil fuels, which Germany mines more of than any other country in the world.”

Week 1 of COP began with heightened tensions when developing countries asked for a formal discussion on the actions that developed countries will take to reduce emissions before 2020 including the contribution of finance for Loss and Damage.  Accusations arose that industrialised nations responsible for climate change aren’t doing enough now.  Fijian leadership eased the friction by facilitating agreement on trust-building mitigation and adaptation measures for all countries, including:

Week 2 of COP led to more progress with the adoption of the first-ever Gender Action Plan to incorporate gender equality and women’s empowerment in climate change discourse and actions. Thanks to the Green Party of North Rhine Westphalia for inviting Dorothy to speak on the gender dimension of the UN climate change conference.  Listen to Dorothy Nalubega of the Ecological Party of Uganda and the African Women’s Network speak about the importance of the gender dimension at COP23.

“taking action to accelerate clean growth and climate protection through the rapid phase-out of traditional coal power. We commit to achieve that phase-out in a sustainable and economically inclusive way, including appropriate support for workers and communities.”

The Marshall Island’s President expressed the disappointment felt by many towards Australia’s refusal to join the alliance:  “We’re neighbours: they should be aware of the issues that are facing small island countries.”  Adam Bandt, Australian Greens MP at COP23, agreed that “Australia is posing an existential threat to many of our neighbours” and passionately criticised the Australian government’s approval and $1 billion loan to the Adani coal mine in Queensland which “will create more pollution than the entire European Union does in a year.” says Adam Bandt.

A breakthrough was achieved in a long-standing stalemate over agriculture, forestry and changes in land use, which together produce 21 percent of global greenhouse gas emissions, making them the second largest emitter after the energy sector.  A UN process was created to focus on practical solutions for agriculture to address how to keep soils healthy and store more carbon in the ground, improved ways of managing livestock, and how the impact of climate change on farming could affect food production.

Carbon pricing and markets are gained popularity at COP23 with China announcing plans to launch a single national carbon market modelled after the EU Emissions Trading System (ETS); and the UN Secretary-General telling countries to put a price on carbon and to stop investing in fossil fuels and high-emissions sectors.  “For years, many insisted that lowering emissions would stifle growth and that high emissions were the unavoidable cost of progress… Today that dogma is dead”, declared Antonio Guterres.

Expressing frustration with slow progress made on “loss and damage” in the negotiations, more than 50 civil society groups and individuals called for a fossil fuel tax to compensate victims of climate change impacts.  The campaigners’ declaration says the fossil fuel industry is responsible for around 70% of global greenhouse gas emissions but bears “none of the costs” of their effect on the climate.

Although the common message from all nation-states at COP23 has been that achieving the Paris Agreement and the 2030 Sustainable Development Goals is urgent, disagreement on transparency around how richer countries would fund climate action in developing nations and the role of the adaptation fund pushed negotiations into the early morning hours of the last day.  The formal COP23 decision text demonstrates that significant differences still remain on how NDCs should be organised, delivered and updated, and recognises that an additional negotiating sessions will be needed before COP24 to ensure the Paris rulebook is finished on time.  This Carbon Brief article and interviews give a good synopsis of the issues.

The Global Greens Coordinator Keli Yen was active at COP23 with the mission to build relationships among Global Greens members across the grassroots to global levels.  Activities included welcoming Green cyclists who biked from Belgium to Bonn and marching in solidarity with the Greens at the COP23 climate march – enjoy scenes from the march and Evelyne Huytebroeck’s explanation of what’s at stake at COP23. 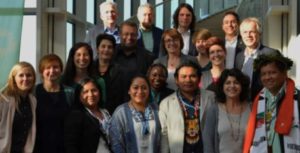 The Green parliamentarians of North Rhine-Westphalia, Germany invited Global Greens & the Coordination of Indigenous Organizations of the Amazon River Basin (COICA) representatives to explain why we have come to COP23, how climate change affects us, and what we are doing about it – watch the video here.  A big thank you to the Greens in North Rhine-Westphalia for reaching out to build stronger connections with Greens globally, and an enormous thank you to the Bonn Greens for your partnership and friendship throughout COP23.

Keli spoke at the Frauenmuseum (Women’s Museum) about the 2017 Global Gender Gap Report by the World Economic Forum which indicates an increasing gender gap in political representation, with female political empowerment being the biggest gap among all measures.  Thank goodness we have the Greens leading by good example and tirelessly fighting to include a gender dimension in climate justice.  Greens in the European Parliament are reviewing the first ever report on ”Women, gender and climate justice” within the EU system – and pushing the parliament to vote in favour of crucial text on the need for gender mainstreaming in both representation and resources in the climate finance regime; the estimate on 200 million climate refugees by 2050 (UN) and the need for an inclusive gender mainstreamed development agenda; and the acknowledgement that climate change denial is closely linked with accepting patriarchy and social hierarchies, and that climate change is an inconvenient truth for nationalism since it requires actions between all states and actors in our societies.  Thanks to Linnéa Engström MEP for the Swedish Greens for sharing this information and for the Greens in Parliament working to integrate a gender dimension in global policy.

Green Parliamentarians met for a Global Greens Parliamentarians Association (GGPA) dinner and agreed to produce a COP23 statement and to develop joint-projects starting with hiring staff from each other’s Green parties to enable international relationship and capacity building.  The Green Group in the European Parliament organised an informative COP Greens family breakfast which brings together Greens leaders to share insights of the climate negotiations from their different perspectives.  The key insight shared by Greens is the prevalence of contradictions between government claims to climate ambition and their continued support of fossil fuel industries and failure to meet their national climate targets.  The Greens concluded the meeting with new energy and confidence in upholding ambitious climate results, informing the public about the contradictions between talk and actions and in getting more Greens elected into office!

A Global Greens press conference was held among Green Party leaders participating in the negotiations to share a Greens political perspective on what happened at COP23?, what are Green parties aiming to achieve at these climate conferences?, and how is Green political leadership going to achieve the climate goals?  The panel makes the point very clear that the Greens are committed to achieving genuine global climate justice!